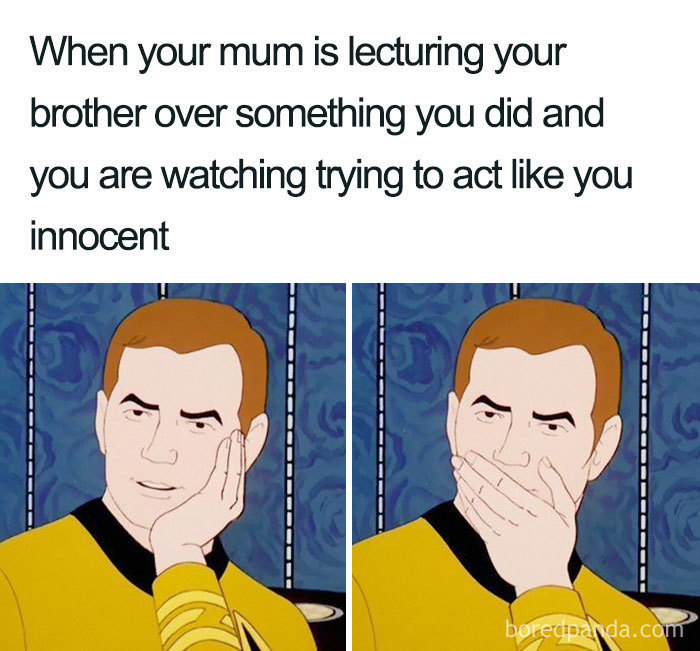 Don’t be expecting some type of soppy shit like “the ability to love” or “empathy” because this is not it bitch. This is the honest shit and it is especially relatable if you have siblings but maybe you do still understand. For context, I have an older sister and a twin sister and I live with my mum and dad, so yeah I can’t really speak for those with younger siblings or those with brothers. Also, if you aren’t a twin, you may learn somethings about what life as a twin is like but I mean you probably don’t give a shit so I suppose we will just get into it lol.

Do you guys get it as well where like you can tell who is coming by the sound of their footsteps and how they walk down stairs and like open doors or something like that because it really is a talent. It’s pretty handy though because you know that if it is your mum or dad or an adult of some sort, you just gotta get ready for either a deep convo, shouting, or your dad coming to fix something. But then there are also the times where they just come up and say hi and stand in your room for a second and then just leave WITHOUT CLOSING THE DOOR and then you ask them to close it and they go running down the stairs like there sore back has suddenly fucking healed itself. And you just lying in bed like what the actual fuck. And it is extra random because my bedroom is on the third floor and they never come up unless they have too, but they just get a burst of energy to go up and move everything around. And then, if it is your sisters, you just getting ready to scare them or fight them, or laugh uncontrollably, or throw them out of the room. It really is a wild card to be honest but all of the choices are a lot of fun. It is weird though how you can tell people by their footsteps but I guess it is cool too

Thinking On Your Feet

You see, the thing is, when you have siblings you always want to get the last word, even if it doesn’t even make any sense, but it has to make enough sense to not get laughed at. It is quite the skill but can get really aggravating after a while because how can you end something that nobody wants to finish? It is quite the puzzle but the things you come up with are absolute comedy gold, at some times anyways. But like it kinda gets to playground come backs where you are just like “no your the idiot” or like you mumble it under your breath so they think they won but really you did, and you also do this when walking away. This kinda ties into the super hearing as well because I could be upstairs and they would be downstairs and whisper “idiot” and I would hear them. Then you have the choice of whispering it back or screaming down the stairs “I HEARD THE YOU BITCH”. The great thing about it all is that they never take offense to what you say. You could tell them they look like Donald Trump or some shit and then we would literally be on the floor laughing. The emotions change very quickly lmao

The closest that you can come to relating to this if you don’t have siblings is when you can look at your best fried from across the room and you just know what they are thinking. Like if the teacher is talking absolute shit and you just look over at your friend and they look back, it is pretty much that. An example of when this happened was when my dad was telling this absolute random story that sounded as though it was going to have a big shock factor at the end but it just was such a pointless story and then I was like “great story dad” and then he looked at me like I just insulted his mother and I just looked at my twin and we just started pissing ourselves it was so funny. I guess humor has changed a lot or something because he was not impressed. But like nowadays that is just how you talk to your friends. Sarcastically. So me and my twin were dying at how he found it offensive. Does anyone else do it where you walk into a room and your sister is there and you just stare at them straight in the eyes with a straight face for like a couple of seconds and then either just walk away or go like “boo” or scream or some crap. I feel like I am the only one that does that and it is a real bonding moment if you get me. Highly recommend.

I swear to god I literally gotta be James Bond in this hoe because you are never safe walking into another room. You never know when someone is gonna jump out at you and you gotta scan the perimeter as tough we were escorting a celebrity (I was going to say president but…) Like I literally check the crack through the door and I analyse every shadow and reflection. The biggest success is when you realise they are going to jump out so you scare them first. How the turns table. I get scared when I go out of the bathroom because that is the most vulnerable place to be in my opinion. And also you gotta be prepared for something else. This is mostly when you go in their room and usually only happens when you are younger, but you gotta look out for booby traps. I remember that when me and my twin were like 6 or something, my twin went into my sisters room to tell her dinner was ready and then a fucking encyclopedia fell from the ceiling and hit her on the head lmao. It is those moments that would make me a bad parent because I would actually be crying because it is so funny. Like absolute genius move. You can’t take things too serious in this job. This job being a sibling. That was quite the funny moment though, but I have never had it happen to me. Maybe it is more of an american thing or something. I might have to give it a try. But surely it’s a bit obvious like, if you were talking to someones door and there is just a pile of books and you can see your sister looking evil and about to laugh, I don’t think it will work anymore. Guess we gotta find out. IT WORKED LMAO

That isn’t really a superpower but I didn’t really know how to word it. Basically what I mean is that you know when to pick your battles and you can change your objectives in a second. For example, I could be talking shit right in front of them, but if I hear anyone say the littlest thing, they will be body slammed by me. Like no matter who they are or what they say, I will be coming for them you know. Like the confidence comes from nowhere it’s literally crazy. I myself am a socially awkward bitch, but you know I’m about to cause a scene if needs be. Can’t nobody treat my sister with anything less than love. Don’t test me bitches because it may seem like I hate them but in reality they mean the world to me and I will do what it takes for her to get the respect she deserves. So yeah, whatever superpower that is. Is it shape shifting? Or like a hulk thing where you just get all the power in the world? Who knows? Who cares?

Anyways, these are just a few of the powers you get when you are a sister. They can vary from family to family I suppose but these are the most relatable ones that I know. If there are any things you and your siblings do, or your family in general, go ahead and comment down below, I would love to see what you guys do and I might mention them in my next post. I hope you have a great day, stay safe and stay yourself PERIODT.

Merry Christmas to everyone!… except those who say happy Christmas. You can go to hell. I don’t really know what it is that possesses people to say “happy” Christmas but I don’t want it. Like it makes me shrivel up and die inside. I… END_OF_DOCUMENT_TOKEN_TO_BE_REPLACED

10 Top Tips To Stay Warm In Winter That Actually Work

If your dad is like mine in any way at all, they refuse to put the heating on, or at least not high enough to actually feel the effects. So I am nowhere to give you some tips for staying warm in your house… END_OF_DOCUMENT_TOKEN_TO_BE_REPLACED

These Brands Are Getting Way Out Of Hand

Up until last month I used to think that Corona was the worst thing that happened to us but fuck me this is 10 times worse. I mean I know the pandemic was tough but this has ruined my whole entire life and all… END_OF_DOCUMENT_TOKEN_TO_BE_REPLACED

I know, I know, this sounds so bloody stupid but I swear that by the end of this post you will completely agree. Selfishness is comforting when you look at it in a particular way. And I’m almost certain that if you are someone… END_OF_DOCUMENT_TOKEN_TO_BE_REPLACED

10 Crazy Facts About Women That You Wouldn’t Believe

Hey guys, today I just wanted to talk about something very random and for no particular reason because why not. I was just on a walk one day and I was kinda just thinking about how fucking mental life is as a woman. I’m… END_OF_DOCUMENT_TOKEN_TO_BE_REPLACED