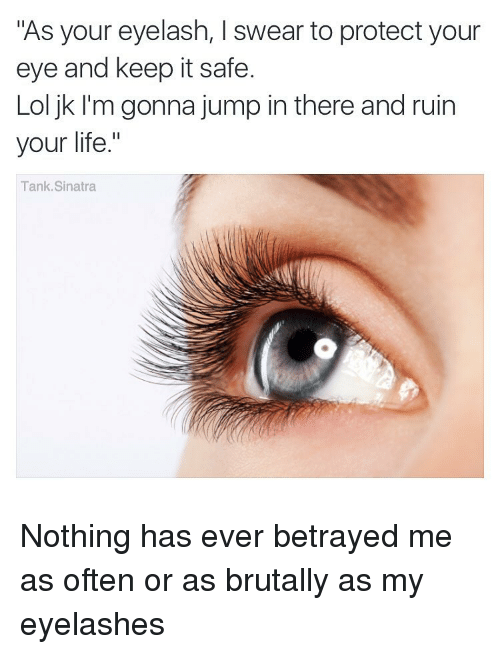 Because I am SUCH an expert in this field, I am going to talk about all aspects. That directly translates to, I think about this shit a lot and think it would be weird to have “eyebrows, eyelashes, eyes and under eyes” in the title. So I guess we’ll get into it, but first I’m gonna switch it up by giving you my inspiration for this post which is so motivational that Emma Watson is quaking. So here it is. I always sit down really low in my chair because I am always exhausted and too fucking lazy to sit up straight, so therefore I have a shocking posture, but that is besides the point. And being the self-critical bitch that I am, I tend to look in the mirror in front of me quite often, despite the fact I have realised I can only see my eyes and everything above it. So, therefore I see my under eyes are dark as shit, and eyebrows confuse me and also help me show my confusion at the same time which is weird and more confusing. Thank you for listening to my TED talk and let’s get into it.

Let’s start from the bottom to the top. Under eyes. First of all, why the hell are all these names so basic. I mean like we have fucking wenis and tongue and bloody shin but we can’t make a name for the things around our eye. Like we literally named one after a fucking animal (calf), or at least that’s what I like to think it’s named after. If we could change the name of these, I would call under eyes vision pits. Why? Well, I got the vision from the function of the eye, duh. And I got pits from arm pits and stuff like that. Fight me about it, I dare you. But yeah, what I find weird about vision pits is that they change colour. Where the fuck is the need? Like in all honesty, why do we need that to happen. Doesn’t all our functions serve a purpose or something? How come, after million years of evolution, we kept this. And it doesn’t even work well. It shows when we are tired, but also after we had a massive nap. I mean I don’t think they have gone away since I was born and they literally get worse everyday. Is it a flaw in how people work because the only reason I could think is that other people can tell if you are tired or sick or some shit, but nowadays it kinda just goes like “oh my days, you look really tired, you should go to bed right now!” and I’d be like “no fucking joke Karen. I haven’t slept in days and it is literally 2PM, I am still in your fucking class and you just set me 2 hours of homework. So what the hell do you want me to do about it?! Do you not think I already fucking know this information?”

So now to move onto the next thing, eyelashes. Or as I like to call them, snake shields. Now, they aren’t literally what the name will suggest because, well obviously. But I named it that because, while I understand they are supposed to protect stuff from getting into our eyes, why do they always seem to get in my eye themselves. Like for real you had one job. But we can’t really blame them, can we. What are 20 strands of short hair supposed to do. Maybe it will stop a crumb or two if I were to be suddenly hit with a packet of digestives coming from directly above and below me, but if I were to get a bloody shower, I can promise you that shampoo would be getting in there. It’s so dumb. It might do more than I realise, like stops the tears from tripping ever second. It’s as if you made a sausage dog your guard. Yeah they may look nice but when they need to be used, they don’t do shit. Make it make sense. And it hurts like a bitch when it gets in your eye which is literally every second of the day. But then you blink a few times and it goes away. What are they? A fucking magician? A hoover? Where the hell do they go? There just like everyone in my school. You think they are nice but they stab you in the back like the snakes they are. But I have one last thing to say about eye lashes before I move on. Why did they become something lucky. I mean, I would bet some creep just made it up on the spot when he was watching someone sleep or something and they were like
“*wakes up* what the fuck are you doing, Chris!”
“*panic* ummm… you have an eyelash on your cheek”
“so? What should I give a fuck when you are watching me sleep!”
“b b because it.. it.. it’s LUCKY! Yup, it’s really lucky. *picks it up with his finger* Now make a wish and blow!”
Like it does sound like some bullshit excuse for something. Maybe not the exact scenario I just described, but it sounds dumb as hell. But will I continue to do it? (with my own eyelashes of course) Most likely.

Eyes. Or as they are also referred as, eyeballs. You see, this is a basic name but I don’t mind it. It has some character to it. It’s just fun to say and anything else would just feel weird. Like we literally gave one of the greatest functioning organ of the body a fucking dumb name. They started off strong with the eye because it is spelt a bit quirky, but they just gave up afterwards and were just like fuck it, eyeball. I don’t really have anything to stay about the eyeball. It is just confusing because it does so much in so little time. Like it does a half ass job with having the images upside down meaning the brain has to finish the job and they do mean I have to look at your dumb ass. But I like them. They also don’t work for a lot of us meaning we have to look through fucking glass for the rest of our life, but it’s fine, it’s a look… 10 years ago. Actually, I think I have a lot of beef with eyes. Now, I am not blind, and I do only wear glasses, and eyes are still great, but like you may as well work? Like, it led to a lot of trauma with people stealing my glasses, making me see smudges and chips for the rest of the day, and having to look at people’s fingers as they ask that dumb ass question “hoW MaNy FIngErS aM i HoLdInG uP?” and then seeing (well…) the look of betrayal on their faces as I say the right number. So actually, while I don’t eyes are weird, for the most part, I think they have a lot of audacity for a bitch named eyeball. There. I said it :[

Last, but not least, the eyebrows. Now, these ones really do confuse me because I feel like they are just a fashion statement. Like God just looked at us and was like, something is missing? So he just put hair above our eyes. Kinda like when he put nipples on men. He just thought it looked a bit… incomplete. Now that I read that bit, it sounds like a dig on people with no eyebrows, but that isn’t what I mean because you are still beautiful, but I just wanted to make a statement that I don’t understand the point of them. So, before I dig myself into a bigger hole, let’s discuss it more. I have heard they are for protecting your eyes, but I have 2 problems with that. One, is that not the eyelashes job? And secondly, why are they so far from our fucking eyes. Now, they aren’t like becoming part of the hair line or anything, but they are definitely migrating. Like, they are at the point of “Donald Trump is gonna come get you” migration. Surely they can’t do that much from up there? But I do appreciate you I suppose. But like I also feel like you expose me way to much and I don’t appreciate it. You must be part of the snake shields cause you really coming back to nip me in the butt.

Anyways, I am happy to make it onto your list of the weirdest posts you have ever read, but was a good read? I think so, but defo leave your thoughts in the comments. I am gonna sign off quick because I don’t have much else to say like, but don’t forget to like, subscribe and check out my other posts. And of course, I hope you have a great day, stay safe and stay yourself PERIODT.

Do You Know What’s Weird? | Plants are alive

Now please don’t think I’m some sort of alien conspiracy bitch, like I understand that plants are a living thing because I went to school (not in the USA) and did biology (again, not in the USA) so I would say I know a thing or two. I also think about things too much which… END_OF_DOCUMENT_TOKEN_TO_BE_REPLACED

POV: it’s Saturday. You are with a friend on the train and because we are so spontaneous we say “hey, why don’t we go to Botanic instead?”. You feel crazy because you are now getting off one stop later, what a rush. You go around and live the quirky life you desired as you shop… END_OF_DOCUMENT_TOKEN_TO_BE_REPLACED

This post is gonna come off as fucking cheeky and kind of playing with American stereotypes, but I want to make it clear to you now that I 100% mean it. So, sorry I guess but it has to be done. To be fair though, when was there ever a need for you to learn… END_OF_DOCUMENT_TOKEN_TO_BE_REPLACED