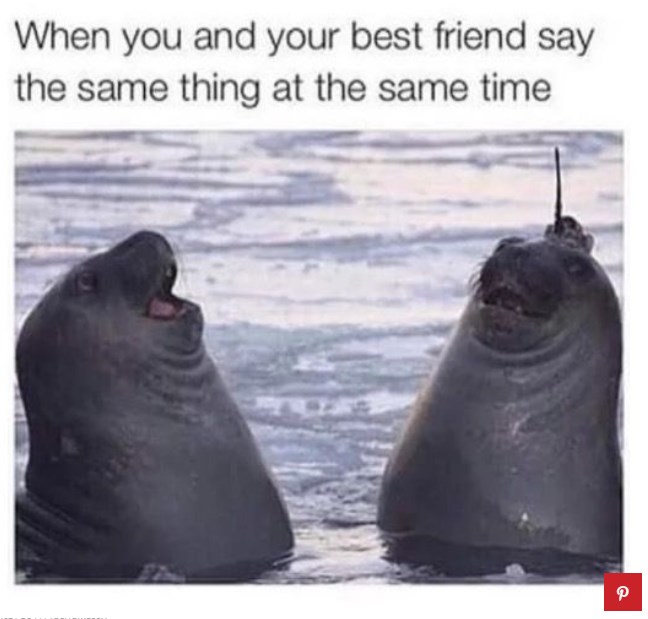 Now, I ain’t tryna rub this in anyone’s face or nothing but like, I have a small group of really close friends and despite the fact it took me a while to get over myself and make friends, it was totally worth it because we are so close. We have never had fights like everyone else seems to have in school, and we are unproblematic. There is 5 of us, including me, so I suppose you can say we are a smaller group, but I don’t think I could imagine there being anymore. There have been people who have tried to go into our group which leads to awkward situations but it has always just stayed the same for us. Pretty much we just live our life like the people who walk away from an explosion without looking back to see it. We are those bitches and I wouldn’t change a single thing about it. So that does sound like a bit of a flex, but I added that because there is one thing that happens that I absolutely love and that I know other people go through with best friends. So lets talk about it.

So, this thing is when you are with your friends, it is usually getting dark and you are not surrounded by other people, so you’d be in a tent or like outside or in your bedroom in an empty house, and then the conversation changes so quickly. Not as in “I love dogs, except when mine bit of my Nan’s arm”. But like when you are talking about something hilarious and then the next minute you find yourself talking about how we just live on a floating rock in empty space and we don’t even know what is out there. And I have no fucking clue how it gets there but like it isn’t awkward at all. We are all just like calm and talking back and forth and then you say something like “I just can’t even comprehend blah blah blah” and then someone else is like “that’s the same with me” and then you realise you aren’t crazy. Then all of a sudden you have just spilled all of the tea and fully exposed yourself but like you don’t even care. The thing that is extra funny about it is the fact that it is pretty much never mentioned again until the next time that situation happens and even then you usually switch up the topic. Maybe one week it was an existential crisis and the next it would be sharing traumas and then maybe next week we’ll mix it up with a talk about how scary the future is. It kind of is just pot luck at that point.

Do you guys get that with your friends though? I always find it so fun because it is so spontanious and you find that other people understand and it shocks you and nobody is proper going to make a massive deal out of it and treat you differently. It doesn’t really happen with everyone that I am friends with, which is literally not that many lol, but with the closest friends this would be a regular moment. It happened yesterday when me and my friends were like just going to Tesco and then a field and it just hits out of nowhere. And then you usually just catapult back into the most random shit. It really is a mountain of emotions. Like we go from fuck all, to everything, to even less than before.

This kind of a random post, a bit out of the blue you know, but like I have changed into a working woman because I have a job and that has made me exhausted and with little time to spare, but don’t fret guys because I will be trying my best to post I just don’t have a mind full of thoughts at the moment. It’s a good job though but I still literally freak out when I have another shift. We move though. So yeah, I’m keeping this short but I also want to add that if you are reading this and are like “oh shit I don’t have this with my friends” just know that it took me a while to find the right people and get comfortable enough to talk with them like that. I mean if you read one of my past posts abut my first year of high school you would know I never thought I would get to this point. So just be yourself and wait because you will find those friends someday and you can’t rush that shit, but it will be so worth it, trust me on that. I hope you have a great day, stay safe and stay yourself PERIODT

I Quit…Was It A Big Mistake?

So I would like to preface that I am a 16 year old who had a part-time job so obviously if you are like a mum of 5 or something and you are thinking about quitting, I would think it through a lot more than what I am going to mention but like just for … END_OF_DOCUMENT_TOKEN_TO_BE_REPLACED

You know. I’m not going to start slabbering about this hoe about the fact she might be listening to us, although I have a few creepy stories about that, or the fact she might be taking our personal information, because I mean why the fuck would anyone want to know that. Today I’m gonna talk … END_OF_DOCUMENT_TOKEN_TO_BE_REPLACED

I’m not above a fight

See, I don’t really like it when people are cheeky to me. I mean you can be upfront and shout at me and I’ll be fine with that. My sisters have conditioned me to that. But if you are being passive aggressive or cheeky in front of me or behind my back, I won’t hesitate … END_OF_DOCUMENT_TOKEN_TO_BE_REPLACED