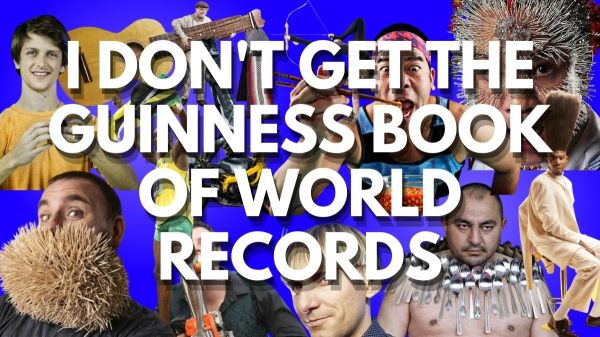 Maybe it’s because I have no skills of my own but like I don’t understand the hype of the Guinness book of world records because the only thing it did was make me confused at why the drink my dad loves is making a book? Like… make it make sense. It’s kinda cool I guess but when was the last time you actually bought one? Probably never because, well, they are kinda fucking expensive, and secondly who gives a shit? The only reason I have one is that my granda had one and it was shiny so I did that thing where you acted obsessed with one thing so that your grandparents would let you keep it. Is that just me? Ok… well that’s awkward. But anyway, I have a couple of questions and problems to do with this book and hopefully, someone can relate to or answer me.

1. Does it get you anywhere in life?

I suppose not everything in life needs to be for a reason but what does it even bring to the table? How would you even bring that up in a social situation because it just seems unnatural and sometimes, depending on what you did, a bit worrying? Sometimes I imagine this…

Record Holder: So yeah, I also got into the Guinness book of world records for shoving a whole bag of jellybeans up my ass!
Person 2:
Record holder:
Person 2: *stands up* I don’t really think you’re who Candyland is looking for

Depending on what it is you did though it would be cool because you get the people who can speak the most languages or read the fastest and I respect that and think it’s awesome. But then you get the ones who can eat a jam doughnut without licking their lips the quickest (sorry Oli White) or can fit the most clothes pegs on their face. Who hurt you? And also, how the fuck did you find this out?

2. How does one even get the opportunity?

Genuinely, I am interested in how you can become an official world record holder because, while I don’t really plan to get one any time soon because… I have no talents, I just always wonder what you would have to do to get one of their people to come over in their fancy suits and watch attempt the record. Surely it costs money? And what if you don’t get it? Surely that’s a wee bit awkward because you’ll probably be sweating or have like 100 straws in your mouth and be like “so… do you want a cup of tea”. I’ve already got social anxiety but I could only imagine what that would be like.

Wait, I literally just searched it up, which I probably should have done before but literally stop attacking me, and I found out that you don’t have to have an official go to you and all you have to do is submit a video (that is obviously up to standard and has a bunch of other stuff that I can’t be arsed to type) and they will send you over a certificate if you did win it. You can get an adjudicator though but I feel that’s more for YouTubers and shit. Not gonna lie that would be a fun job. I don’t know how much that would cost but I don’t even think I wanna know. If you are wanting to read more about it this is their website btw.

3. What happens when someone else beats you?

Obviously, at some point in your life someone will break your world record and you’ll probably be fucking raging but it is what it is, you gotta pass on the torch, but what actually happens? To be honest, I don’t really know what I am expecting as an answer. A SWAT team raids your house and takes the certificate, removing any traces it ever existed, or nothing happens and you find out you were beaten because their mum posted it on Facebook? Logically it probably just says the year you got it in and what your results/record was so when someone else beats you they have proper updated evidence, but like that isn’t that fun to think about. I mean I’ve gotta get some good content out there FOR FUCK SAKE.

4. Can you just make one up and then say you are the best?

When I hear some of the records people achieve I kinda lose hope that I’ll ever become mentally stable again because all of these people are just crazy. They have done the most random crap and now have a world record. How does that even work though? Could I make up some random crap and be like “This is my attempt at giving the least shits for the longest time ever” and then boom, the next day I’m getting my photos taken. I feel like I have heard somewhere that the Guinness people will review it (obviously) and then make the minimum target that you have to get to win the award, but surely if you don’t reach the target but are still the only person to have ever done it you are technically the record holder? Is there someone who has the world record for making up the most world records? Surely there is… *runs off to make new records*

Don’t get me wrong guys, I respect the fuck out of anyone who has a world record and honestly I would run at any chance I got to get a world record even if it was the dumbest shit. It is quite the flex, but sometimes I stay up at night worrying about how stretched out the ears of the world’s strongest ears person must be. They are pulling fucking lorries and it scares me for so many reasons, one being how the fuck did they realise they had strong ears and for why? Like honestly I don’t even want to talk about it. Does the certificate make up for it? Can that guy get the bag of jelly beans out again? I wish you luck.

Anyways, I suppose that is my post over now and I don’t know why but that last paragraph got me kinda worried. What does happen to all those people after they win? Do they just gotta train for a new one or go back to normal life with a random party trick. If you have a world record please do comment down below because I think that’s so interesting. Surely that boosts the fuck out of your ego because I know I would be wearing that shit around my neck like “oh, this old thing?! How embarrassing, it’s just my world record certificate. No big deal” like the main character I am. But yeah, please do like, comment and follow for more because that means more to me than any certificate ever could. I hope you have a great day, stay safe and stay yourself PERIODT.

POV: it’s Saturday. You are with a friend on the train and because we are so spontaneous we say “hey, why don’t we go to Botanic instead?”. You feel crazy because you are now getting off one stop later, what a rush. You go around and live the quirky life you desired as you shop… END_OF_DOCUMENT_TOKEN_TO_BE_REPLACED

This post is gonna come off as fucking cheeky and kind of playing with American stereotypes, but I want to make it clear to you now that I 100% mean it. So, sorry I guess but it has to be done. To be fair though, when was there ever a need for you to learn… END_OF_DOCUMENT_TOKEN_TO_BE_REPLACED

How To Describe My Blog

Sometimes when I am writing a new post I sometimes look at myself in the mirror and wonder what the fuck I’m even talking about. What genre is this? I would say comedy but then again I don’t want to seem cocky and I don’t even know if people understand my humour. I would also… END_OF_DOCUMENT_TOKEN_TO_BE_REPLACED