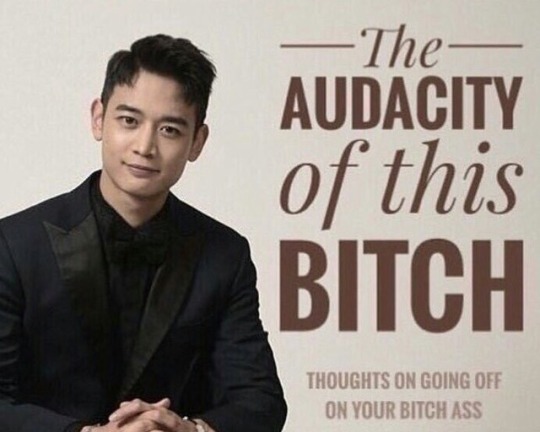 Hey guys, so if you have read my blog before, you will know that I have a twin sister. We have pretty much the same friend group but there are a few people that she would be more friendly with than me because… well, I’m a socially awkward kinda bitch. But the reason the title of this post is “the audacity” is because she went out with one of her friends and I realised, she has a life away from me. That cheeky bitch.

Was that time we spent together in the womb not enough for her?! I mean how can she function and survive away from me. It just isn’t allowed. I mean if they asked me if I wanted to go out, would I say yes? Probably not because I am starting this thing called “slowly growing apart from others until I have no friends and eventually be in the elite level of depression”. It isn’t funny. I highly don’t recommend but I can’t go back now lol. I really can but that is besides the point. I then realised that my older sister and my mum and my dad have a life. They are not just characters that only live for my life. They have friends, a personality, they must be nice if people actually want to be around them. People see them as a friend or a co-worker and not as a parent or a sister. And sometimes you just gotta take a moment to realise all that and kind of understand the… what’s the word… the audacity. Even you, the person reading this, has a life. You are somewhere in the world doing something, maybe you are on a train, you are on a plane, you just woke up from a nap, maybe you are having lunch. I don’t even know! But you have a whole freaking life and by some miracle you are reading my own freaking post and I don’t know how low your day has got to get to reading this shit of a post, but hey, thanks I suppose.

Do you know what else makes me go “the audacity of that bitch” is whenever you are walking and a person that clearly sees you doesn’t move out of the way even a bit when the are taking up the whole path. Let me tell you a few stories about a couple of those times. So it was last Christmas. I was walking my dog as you do, and this kid, an obvious prick, was on his bike around his street. I was on the footpath and he was on the road and I was walking, minding my own business. There were no cars around or nothing. Just me on the footpath and him on the road. And guess what this idiot decides to do. He looks me straight in the eye, goes onto the foot path and cycles right into me. He nearly fucking hit my dog and I wouldn’t give as much of a shit if he hit me, but if he hit my dog, lets just say I would be on Santa’s naughty list and he would be on the ground. He is defo gonna be a chav when he grows up. I just glared and was just thinking that he is gonna be a prick to some poor person in the future. He is gonna be so mean to whoever he is around and I hope to fuck it ain’t me. Next time I plan to just stop and let him move out of the way first because ladies first bitch!

Another time something like this happened was literally last week and again I was walking my dog and it was in a forest park so the paths are a fine size, but there isn’t much space to go off the path if you needed to. So I was walking and this man and his wife we walking towards me. They dead-ass looked me in the eyes, they fucking saw me, and I moved to the side a bit to be polite because I know there is still the whole “respect your elders” bullshit, but I couldn’t move much further so I expected them to at least move to the side a bit, especially with the pandemilevato. But guess what, they don’t move an inch. Not a fucking millimetre and here I was looking like an actual ass because I had to turn into a fucking leaf just to not bump into them. And you may say they didn’t have enough room or they didn’t see me. But they looked right at me, they could have gone one behind the other or moved over a bit, and they did the same thing again. I am going to make a pact with you guys though, and you have to try and do the same. Next time you see that someone is going to do something similar to you, don’t move. Stand your ground and then if the people turn around and be like “your rude” or “why did you hit into me” just say “because I haven’t got no more fucks to give”. I mean quite obviously, don’t do this to a car or if you yourself are in a car because I don’t want to be charged for being the cause of a murder.

Reading through this post, the vibes changed quite quickly didn’t they, but I think that was a pretty relatable one if I say so myself. But anyways, don’t forget to like, follow and comment if you enjoyed that content. Make sure you check out some of my other posts as well because, not to toot my own horn, but some are pretty good. I hope you have a great day, stay safe and stay yourself PERIODT

Dear Pro-Life Protestors: Rights Give You A Choice, It Doesn’t Make One For You

Reactions There is no excuse History is destroyed Do you know what makes it even more hypocritical? Conclusion Reactions These are the people’s reactions after the US supreme court overturned the Roe v. Wade decision that gave women the right to an abortion. In other words, on the 24th of June 2022, the USA destroyed… END_OF_DOCUMENT_TOKEN_TO_BE_REPLACED

The Best Support Act Billie! Billie! Billie! Dublin’s Disaster This title isn’t some sort of click-bate type of shit. I literally can not believe that this concert happened. And the thing is when I try to explain it to my friends they just think I’m some obsessed fan girl but I just can’t put what… END_OF_DOCUMENT_TOKEN_TO_BE_REPLACED